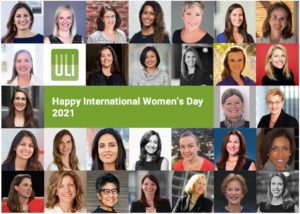 ULI San Francisco celebrates International Women’s Day by highlighting the women leaders within our District Council and the real estate industry while also recognizing the gender inequalities that continue to exist and working to close the gender gap in the land use industry.

ULI SF’s Women’s Leadership Initiative (WLI) Committee works within ULI SF to ensure that the voices, experiences, and perspectives of women leaders are a regular part of the rich content of the programs that the District Council delivers to its diverse membership.

The WLI Committee also works to increase the number and visibility of women leaders within ULI and the broader real estate and land use industry.

Thank you to all the women leaders within ULI San Francisco for contributing their time and talent to making the many initiatives of the District Council a success!

The ULI SF Diversity Membership Fund is designed to open opportunities within ULI to groups who are underrepresented in the industry.