An excerpt of the extended Perkins&Will case study 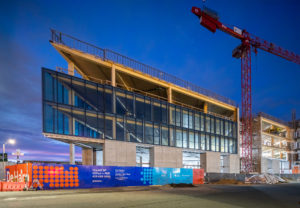 The family who owned the site of the former San Francisco Gravel Company approached SKS Partners to help them transform the property into something “special” that could be passed to future generations. Today, the building at 1 De Haro Street is San Francisco’s first multi-story mass timber building, as well as the City’s first cross-laminated timber building. Mass timber absolutely makes 1 De Haro special, but as SKS Senior Project Manager John Fisher notes, “the material choice was as much practical as it was aspirational.”

Perkins&Will, the project’s architect, has designed more than 30 mass timber buildings in  Canada, the U.S. and Europe since 1995–including several in Northern California–bringing experience with a product that is still in the early stages of being embraced by the U.S. building codes. The conditions on the triangular 1 De Haro site had the project team considering wood from early on. Directly adjacent to an underground portion of Mission Creek, the site’s soft soils required deep piles to anchor the building on stronger footings. The ultimate weight of the building would determine the number of piles necessary. At one fifth of the weight of a comparable concrete or steel structure, mass timber had a clear advantage. For comparison purposes, Perkins&Will carried designs for both concrete and mass timber through the schematic design phase. 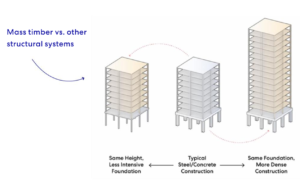 The 1 De Haro building combines Production, Distribution or Repair (PDR) uses and office space. A concrete ground floor was necessary for the light industrial PDR use and qualified the development as a Type IV: heavy timber over a Type IA concrete podium. This also allowed a greater mass timber floor area than would have been with Type III or V construction. Zoning restrictions at that time capped the building’s height at 58 feet. When targeting 12.6’ floor height, the design team quickly narrowed out steel as only concrete or wood construction with exposed slabs and shallower beam depths would work.

Laboratory fire testing of mass timber components have been studied to validate the performance of the wood assemblies in fire conditions; however, limited testing has been performed on mass timber interfacing other building materials. Perkins&Will collaborated with fire-stopping manufacturers such as Hilti and STI and officials to consider alternate means of evaluating the building. The 1 De Haro team worked with Hilti to develop details and engineering judgements to demonstrate how the building meets the intent of the building code.

Despite timber’s lower mass and subsequently lower lateral forces on the building compared to steel or concrete, the codes also didn’t address seismic factors and requirements with mass timber. 1 De Haro satisfied these concerns by using steel BRB frames, to transfer these lateral loads, in conjunction with Glulam beams and columns used for gravity load transfer. 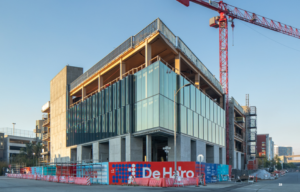 The upper floors were constructed with a CLT slab and glulam post and beam structure, utilizing wood-to-wood connections. To dampen the noise resulting from the solid surfaces, the CLT floor slabs were topped by concrete with an acoustic mat break. The vertical and horizontal wood elements of 1 De Haro’s stunning wood ceilings and wide open spaces between its massive columns inspired a glass curtain wall that wraps the building. The expansive windows naturally light the space and showcase the material to the outside world as well. As Perkins&Will Design Director Peter Pfau notes, “It’s amazing how beautiful it is in there. You don’t have to spend money covering up the ugly construction, instead you just celebrate the beauty of the wood and detailed craftsmanship.” 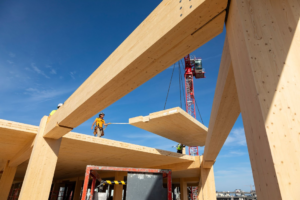 As a speculative construction project, mass timber presented additional benefits as well. The wood beams and supports are a more forgiving and flexible framework than concrete or steel. The needs of future tenants are met by coring holes in the wood–which can be easily plugged as needs change. Mass timber was also a key selling point as SKS marketed the space. Prospective tenants identified with the building’s story of sustainability and light environmental impact. Many noted an internal shift or feeling they got from being in the presence of the wood elements. This is a real phenomena, known as Biophillia, that is experienced when inhabiting a space that connects with nature in meaningful ways. Research has shown that employees’ well-being, productivity and creativity improved in a natural office environment. SKS received three offers to lease the entire building. SKS Director of Asset Management Yvonne Fisher attributes the strong interest to the project’s sustainability and aesthetics.

In addition to being the right structural choice, the team realized savings in time and costs. But the carbon story is perhaps the material’s most compelling attribute. Concrete and steel are carbon intensive and their production emits high levels of greenhouse gas. Conversely, mass timber has significant carbon sequestering abilities. In fact, a recent study found that a broad adoption of mass timber could be a tipping point that shifts the construction industry from a significant carbon source to a carbon sink.

The 1 DeHaro team found Nordic’s turn-key services to be an appealing benefit. The manufacturer not only supplied the product; but also installed and provided design assist coordination services. In addition, Nordic was able to deliver the wood by a single train–which produces six times less CO2 than a truck–from Chibougamau, Quebec to Stockton, California leaving the final few miles easily bridged by a flatbed truck. When counting carbon, understanding how mass timber manufacturers manage their forests, produce their product and their methods of delivery are important factors. Ultimately, design teams need to find a manufacturing partner that shares their vision–not just for the project, but for a carbon-free future.